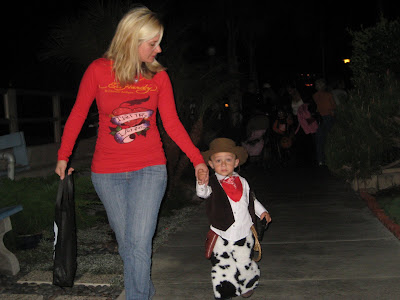 For Halloween, David and I picked up our godson, Fernando, and took the boys down to Naples, Long Beach for trick or treating.  It was a beautiful night and Naples Island was packed with people. 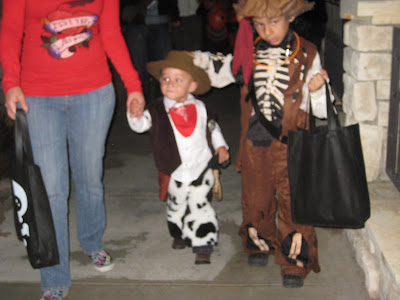 The boys loved the boats, lights and decorations as much as they loved the candy!  It was kind of like walking through one big party because most people were outside on their porches and decks, passing out candy and commenting on all of the kids and costumes. 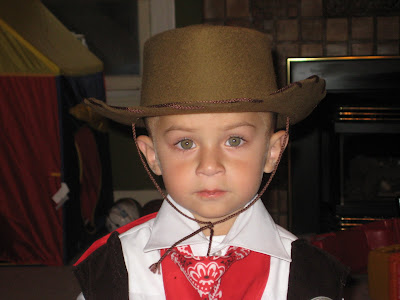 Salvatore's costume was a big hit.  People said he looked so "authentic".  Well, thanks to Boot Barn, Sita's homemade vest, Patty's chaps, Rosie and Megan's spurs, and David's patience to put it all together.   Salvatore could walk in his boots fairly well, but climbing steps was challenging with his chaps, holster, gun, and lasso on him.  So while he held his pistol and lasso, I held his candy bag.  The bags were full, but I must say I was disappointed to get so many Starburst and Tootsie Rolls.  Those are my two least favorites and made up 60% of the loot this year! 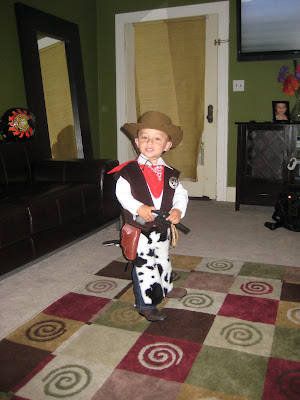 After an hour and a half of walking the streets, we returned to Fernando's house and played Beatles Rockband til almost midnight.  I sang the lyrics to my favorite song, "I'm Looking Through You" while Salvatore played the drums.  It was strange to wake up to the sunlight this morning after changing our clocks back, but we enjoyed that extra hour of sleep!  Now begins the countdown to Thanksgiving!
Posted by The Liconas at 11:22 AM