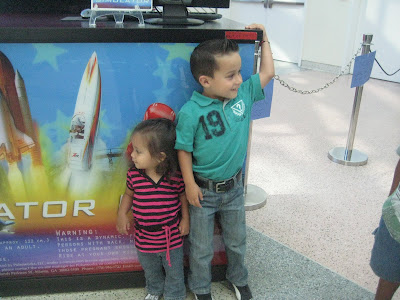 Much like this story, Salvatore uses his imagination, back-ground knowledge, and infinite wisdom to understand and manipulate the world around him.
While he was helping me cook dinner the other night, I told him that he was my favorite son.
He got extremely quiet.
Then he asked me, "What about Valentina? She's not your favorite son?"
(Ahhhh...this is where I am so blessed to have one of each.)
I answered, "She is not my son, she is my daughter. Because she is a girl. You are my only son." He started shaking his head and then his finger (he gets that one from me) and replies, "No, no, no, no. Valentina is not your daughter. She is MY daughter. And she's my wife. You have daddy as your wife and she is mine, got it?"
I think I got it.
Posted by The Liconas at 6:36 AM 1 comment:

While hanging out in my dad's office the other night, Salvatore picked up two of his religious statues and starting playing. He correctly identified the "Mary" statue but mistakenly called the "St. Francis" statue "Jesus". When he started playing with them and make believing little conversations and scenarios, I was laughing. First, he was pretending they were on a soccer team and he was making one score goals while the other cheered on. Then, he was pretending that they were arguing over something that I didn't quite understand. No problem, though. Within seconds, he had them kissing and making up.
Uhhhhh, guess we need to read more of those children's Bible stories, huh?
Posted by The Liconas at 8:58 PM No comments:

A spelling snob to be exact.
I hate it when I see misspelled words.
Not that I don't ever make those mistakes. Mine are usually from carelessness with checking because I pride myself on my ability to spell well.
But, I can spot them anywhere and I always point them out.
I notice them in books, notes, letters and signs.
It's like a game to me now.
It all started in the 3rd grade.
I was an excellent speller and won the Spelling Bee for Terrell Elementary School in San Jose. I then went on to the city championship, being one of two finalists left.
I lost.
I misspelled RESPONSIBILITY.
I went home that night and started memorizing the spelling of many words in "chunks" or with "chants". I teach the same chunks and chants to my students. My favorite one is to teach them how to spell "friend."
I tell them to first spell "f'" and then "r" because you can hear those two letters first. Then I chant, "I will be your friend until the very end." This shows that the letter "i" comes next and when you cover up the "fri"...you see the word "end" just like we said in the chant.
They all love it!
So, yeah...I'm a big spelling snob. I struggle with simple math problems sometimes and I have poor common sense, but spelling...it's my forte. Are you looking it up?:)
Posted by The Liconas at 6:33 PM 3 comments:

I used to never let Salvatore eat popcorn until he was 2. Even then, I broke off the crusty kernel piece so he would never choke. This was nearly impossible to do in the pitch black of a movie theater.
With Valentina? She ate popcorn, crusty kernel and all, for DINNER the other night. DINNER.
I used to freak out when Salvatore screamed, cried or whined in the store or bank or wherever we were. I would get so embarrassed and immediately decide if I had to firmly discipline or just bolt.
With Valentina? I couldn't care less. Really. I have not only finished shopping while she has a fit, but have continued to finish the rest of my errands, dragging her to multiple more stores.
I used to always wipe Salvatore's mouth and make him sit in his high chair for the entire meal and blah blah blah.
With Valentina? She is the messiest eater and I literally hold her out for Benedict to lick her clean. And she hates her high chair now. Most meals are in our laps or while she runs around the living room.
Salvatore, I am so sorry if I screwed you up by being my first born. 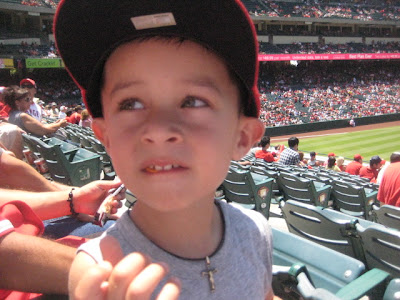 Valentina, please don't grow up to be a wild gypsy.
(She climbed up on the table to help herself to David's soda and Salvatore's cookie) 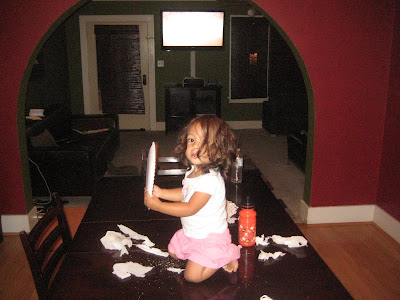 Oh yes she did, Ana! 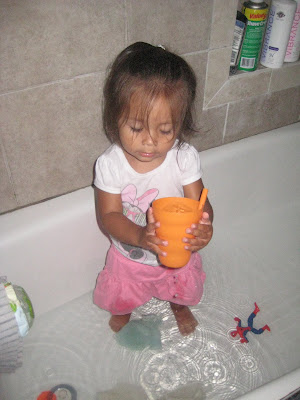 While watching the repair men fix my dad's sliding back doors (a rock got violent under the edger and smashed them up), we found all sorts of things that also caught our interest in the backyard. Salvatore found a praying mantis on his toys and we watched it dance and sway as it moved. Valentina yelled at every fly, worm and rollipolli she found. I killed one small spider that was hanging out on their slide but sent my dad to do the dirty work on the one the size of a quarter who was spinning a nasty web on the gate. A couple of blue jays on the grass and a huge flock of local green parrots flying overhead rounded out the adventure. Oh, and Valentina really missed the little cat because she kept calling for it and looking under the house.
She loves to go up and down the slide now all by herself. Truth is, we "accidentally" discovered she could do it by herself when she was 13 months old. She is less fearful than Salvatore at the same age. He learned to walk in the dead of winter and we were inside so much then. She has a totally different experience that she learned this spring and summer and wants to do everything her big brother can do, including tell stories that go on and on and on.
Posted by The Liconas at 2:57 PM 2 comments:

As in the hot summers past, we had another feral cat living under our house.
She was super thin and had beautiful green eyes. She actually looked healthy, like she belonged to someone but just got lost, unlike the wild feral cats and kittens we found last summer and the summer before.
Benedict discovered her first with his constant barking at 2 a.m. We have spent many sleepless nights this week listening to the cat beg for us to feed, pet, or love her while Benny barked his jealous retorts.
We did give in and gave her some water. It's been over 100 degrees here and I would guess it to be even hotter under the house.
The kids were smitten. They would call for her each night and wave at her through the screen and windows. Valentina learned to meow.
But David is allergic. Like instantly. He went out to give her water and had small welts as soon as he walked back in. She nuzzled me once and everyone got bit by fleas.
But her pooping on the front porch was the final straw.
We searched the lost pets database in La Habra and found nothing to match her description. We looked for street signs or posters asking for their lost one. We asked neighbors and had no luck.
We called animal control who told us that they can not take cats unless they are injured or dead.
Averaging 2 hours of sleep a night all week, well... something had to be done.
So we all jumped in the car, knowing that she would follow, and drove up the street to a nice big park in the hills. David and Salvatore prayed the Our Father in Spanish for her as I held her in my lap. I walked her over to a big tree, gave her some more food and water, and said a quick good-bye.
Good luck little gatito. We really wish the best for you.
Posted by The Liconas at 11:03 PM 1 comment: 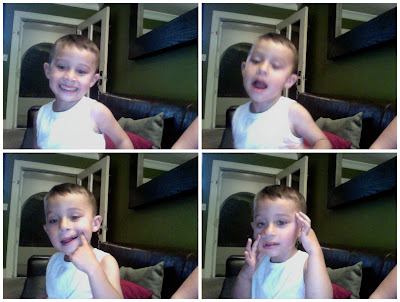 Salvatore officially started back at preschool today.
Lolo picked him up this afternoon and Sal announced that he had a great day and did not cry. More specifically, this is what he said:
Lolo: How was school today?
Sal: Good. I didn't cry.
Lolo: You didn't? That's great!
Sal: Well, I wanted to, but I just didn't.
I think he is gaining his confidence back.
Salvatore, we are proud of you and can't wait to watch you grow and learn this school year!
Posted by The Liconas at 8:34 PM 1 comment:

The school year has started again.
So far, so good.
In true Shalimar fashion, my lunch bag is bigger than my school bag each day.

Since I have to work and help financially support my family, Richman is the best place to be.
I get to see my friends.
I get to spend time with my students.
I get to talk about interesting, funny, cool or sad things with people whom I admire and respect.
I get to write, type, and exercise my brain.
I get to make schedules, come up with plans, change minds, and pay attention.
And while I hate not being home with my kids and making their breakfast and lunch, I keep reminding myself that someday soon, both Salvatore and Valentina will be walking out that door each morning with me on the way to school...a place where I hope they have teachers who get up and leave their families each day to come and serve.

Salvatore will start his official preschool year this Wednesday. He will attend the same great school that he tried out in June. I picked up his calendar and am ready for him to start this journey of education, friendship, successes, failures, projects, sports, assemblies, fundraisers and school functions.
Wish us luck!