This time, I decided to put her 8 month sticker on her back.  So you could see her standing up! 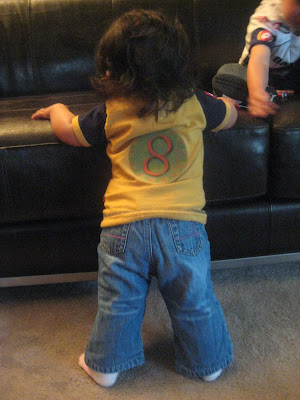 We woke up to a rainy Sunday, after 75-80 degree weather for the last two weeks.   We all got dressed in our Pumas shirts and cheered them on.  They are currently winning 3 to 1! 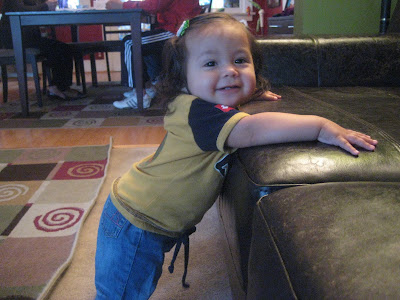 Sal is pointing to the sticker on her back and telling me that she is number 8! 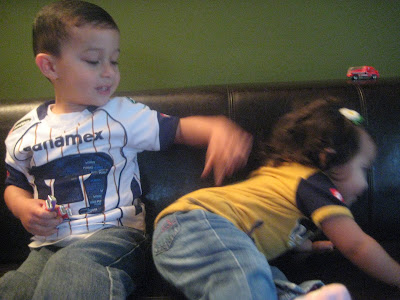 She goes in for a little bite...this teething is crazy! 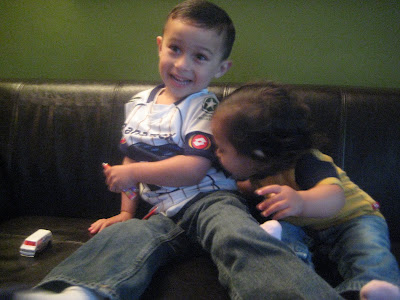 It doesn't faze him...yet. He gives her a little kiss. 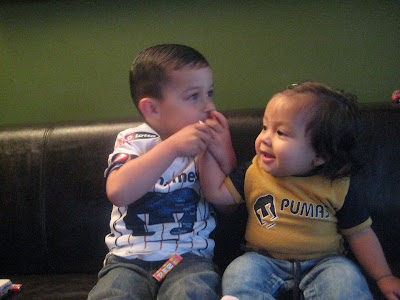 And she also has 4 top teeth now.  They all fought their way in around the same time and she was pretty miserable for awhile.  Yes, the picture quality is horrible...Sara would have taken a much better picture!  And don't be fooled by the last picture that she is crawling.  Not yet.  She acts like she wants to, but then would just rather roll or scoot around.  She still loves to dance to any music she hears.  And she babbles non-stop...just like her big brother! 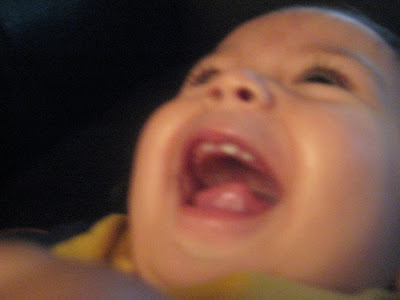 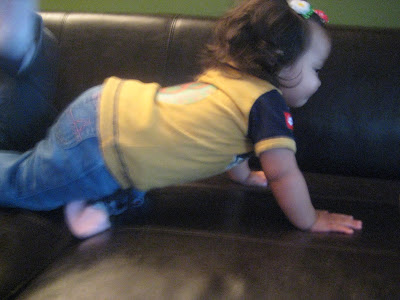 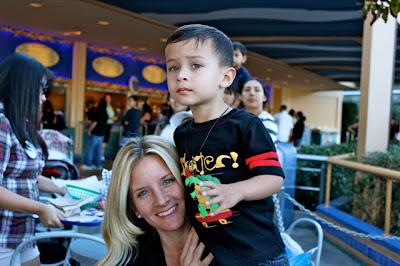 Salvatore and I met Sara, Molly, Ana, Mia, and Daniel at Disneyland on Friday afternoon.  We had this day planned since October.  Valentina had a little head cold, so she stayed home and slept all afternoon with abuela. 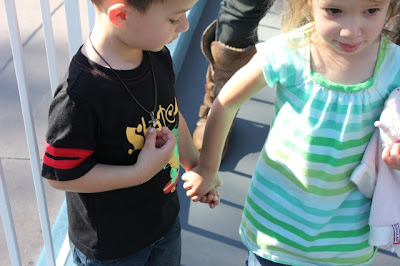 Salvatore and Mia held hands for most of the day.  The kids all kept a great eye on each other, so it was not too difficult for us 3 adults to manage the 4 little ones. 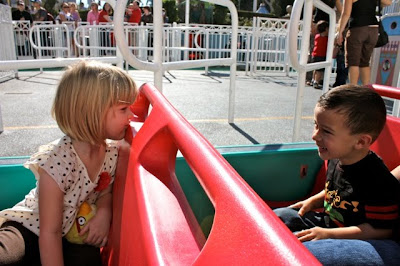 "...and a smile means friendship to everyone..." 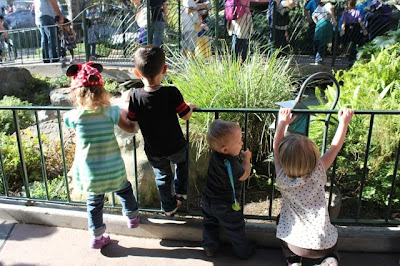 Mia, Salvatore, Daniel, and Molly checking things out while waiting in line.
We rode Small World, Jungle Cruise, Pirates, Buzz Lightyear, Alice in Wonderland and the Train.  We also snacked all day, took turns holding, hugging, kissing and loving each other's children, and laughing a lot.  The kids were all wonderful and we had the happiest day!
Posted by The Liconas at 8:43 PM 3 comments:

Music runs through me like the blood in my veins...constant, fresh, and necessary.
I have always carried at least one tune in my head at any given time and many more in my heart.
My love of reading came from being able to open up an album or cassette insert and read the lyrics that meant so much to me.
And as some of you know, I spent one day buying my wedding dress and shoes, one week on all of the wedding planning, but almost two months on the music alone.
I have had a tough time lately at work.  Many challenges to face this school year.  Many obstacles to overcome.  Many new things are in the works.  New things that are exciting but challenging. Rewarding but tense.
What gets me through?
This song.
Posted by The Liconas at 6:18 PM 2 comments: 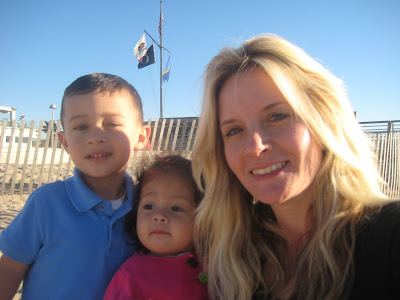 We took some jewelry stuff out to Hermosa and decided to stop by the beach. 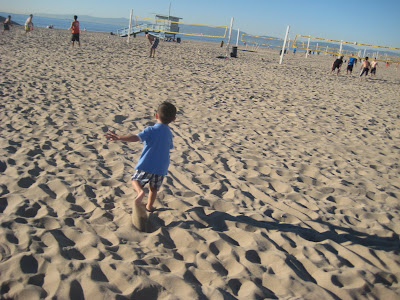 After walking the pier, Salvatore was first to remove his shoes and dig into the sand. 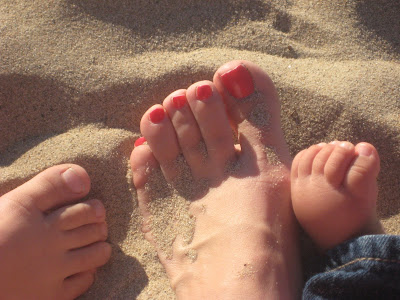 We all followed his lead. 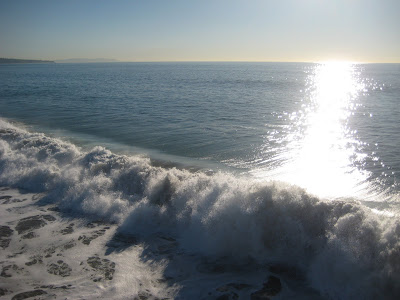 These wave pictures loaded backwards, but they look great either way. 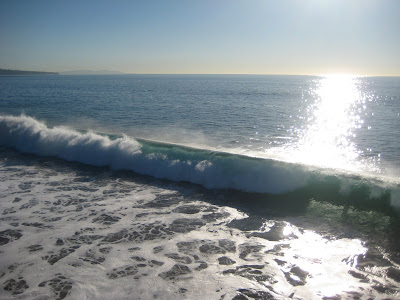 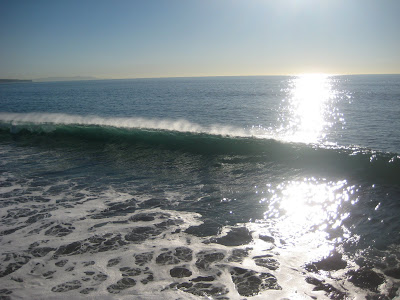 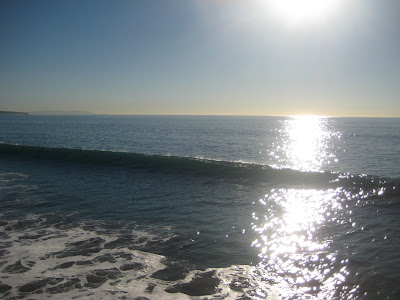 We shared ice cream.  Salvatore likes to take his spoonfuls right off of my spoon.  We giggled a lot.  Abuelo and abuela also loved the freedom and beauty of our afternoon at the beach.  Can't wait to go back soon.
Posted by The Liconas at 8:07 PM 5 comments:

What are your thoughts on seat protectors?

Potty training has been split into three phases.
Phase one is practicing and "training" at home.  He knows how and gets the job done very well most days, with occasional "accidents" and more "on purposes".  Sigh...
On to phase two...potty training in public.  Restrooms, I mean.  While out shopping, at the bank, in CostCo, at the park, etc.
Phase three is when they stop needing and wearing a diaper at night. We are not there yet. So back to phase two.
I was so afraid to venture out too far with him wearing his Lightning McQueen underwear beneath his Guess jeans.  I was so used to having to run multiple errands over 2-3 hour stretches that I could not imagine trying to throw using many public restrooms into the mix.  But I have.  And he does well in public.  So far, all of his accidents and "on purposes" have been at home.  He acts like a pro in public.  Somehow I have managed to get him, me, and Valentina and her diaper bag into the tiniest of stalls when nature calls.  And he is not afraid of the automatic flush yet.
But those darn seat protectors!
Why would I be cursing a seat protector?  Aren't those meant to protect you from any filthy disease just lurking around waiting to attach itself to your pants, your underwear, or your skin?  I have been a faithful user of seat protectors until the other day.
We were in a public restroom and he was waiting patiently for me to pull the seat protector out and place it on his throne.  While holding him on the toilet, he proceeded to position himself to make sure he was "aiming down".  I noticed that I had forgotten to punch through the seat protector, but figured it was no big deal.  Well, as he started to go, his aim down was redirected by that stubborn seat cover, and it ended up shooting right out at me.  I was the one in need of a change of clothes and I was simply not prepared for that!
I think next time that I will just go back to the old fashioned way of making my own little seat protector out of toilet paper.  You know, the kind that takes 3 minutes to make because you use like 30 sheets because some of the sheets act like they will stay put and then they fall in at the last minute so you have to start all over again.  Takes a little more time, but dry clothes are worth it.  I mean, I can't possibly pack us BOTH an extra pair of clothes, right?!
Posted by The Liconas at 11:43 PM 5 comments:

Alright, Who Gave Her Turkey? 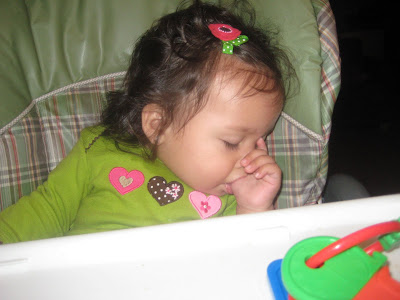 David's sister, Mayda, did this trick to Salvatore when she was here and he totally believed that the money was in his ear.  So we kept the trickery up and he still falls for it.  Cracks me up.  Cracks everybody up.  And speaking of cracks....he also fell for dear Aunt Donna's "Oh my...there's a crack in your butt" routine.  Remember mom?  Remember Brian? Ha ha.
Good times.
Posted by The Liconas at 7:59 PM 2 comments:

Fool Me Once, Shame on You. Fool Me Twice...

I get a strange feeling inside of me whenever I see a homeless person, especially if it's a woman.
I go through her life in my mind and try to imagine how she got to that point, and how she may get back.
I wonder where her father and mother are.  Does she have siblings?  How could they let this happen to her?
In the parking lot of our local WalMart, I was approached by a woman younger than I am and she asked me for money.  I was shopping with both kids and it was dark outside.  I wanted to help her and I wanted to run.
She approached me with a story already leaving her mouth.  I didn't even really listen to her story, just handed her a couple of bucks and she quickly moved on.  She even said, "God bless you."
I thought about her all night.
Shopping at WalMart again, I saw her.  She was going up and down each parking lot aisle.  Asking for money.
I was listening to her story now. She had a different one for each person she approached.  I had a sad, strange...sad feeling inside of me now.
It's been weeks since I first saw her.  Does she tell a new story each time because her truth is so painful and hard and embarrassing?
Or is she just fooling us all?  I don't know.  I don't ever want to know.  But it makes me think even more about my kids, especially my little girl.  That lady is, or was, someone's baby girl.
She asked me for money again.  There was no sense of fear, urgency, or worry in her voice.  I did not open my wallet.  I prayed for her as she walked away, which is sometimes all one can do.
I hate this feeling...
Posted by The Liconas at 9:27 PM 4 comments:

A Better Version of Her Dancing

This video is easier to see because it was day-time.  I didn't realize how dark that last one looked.  I LOVE to hear Salvatore laughing at everything that she does!!
Posted by The Liconas at 9:49 AM 1 comment:

Valentina loves this police car toy that Salvatore got for Christmas.  She loves the song that it plays and now dances to it.  I love to watch her dance and dance, but I really hate that the song gets stuck in my head. For. Days.
Posted by The Liconas at 6:44 PM 1 comment:

Salvatore isn't the only one who cracks me up...many of my students do as well!  I have heard many funny stories, jokes, one-liners, come-backs, and comments from them over the years and I in turn share those with my family and friends.  Here are a few from this week:
Names shall remain anonymous to protect the innocent :)
Second grade girl:  Mrs. Licona, how old are you?
Me: How old do you think I am?
Girl:  Maybe about 55. Or 56.
Fifth grade boy:  Geez, Mrs. Licona, you are looking better than ever! (while sheepishly side-hugging me)
Third grade girl:  I think that ______ farted.  Really.
Me:  Well, it happens sometimes, so let's just ignore it and move on.
Girl:  I can't.  I think it blew a whole in your carpet.  And it stinks.
Good times.
P.S. Happy happy happy happy 3rd birthday to Molly!
Posted by The Liconas at 7:32 PM 3 comments: