When Grandpa Gets Her Dressed... 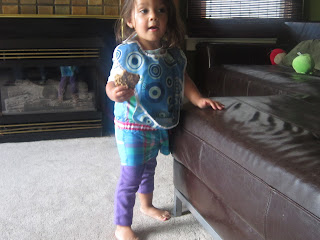 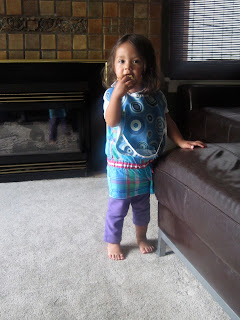 It may be a bit hard to tell from these photos, but when Lolo got her dressed, he put both of her legs through one pant leg!  And didn't notice! And she didn't notice! And she ran all around that morning as if nothing was wrong.  Well, it was more like a penguin wobble than actual running, as she was so restricted!  We laughed so hard, we were crying.  Especially my dad.  Love that about him! 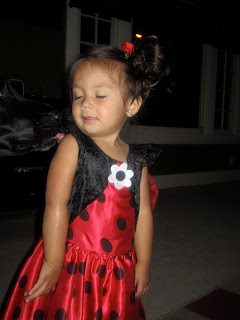 Later on, they raided their closet and found their Halloween costumes and insisted on wearing them. 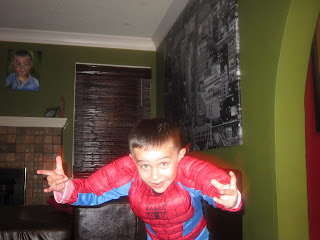 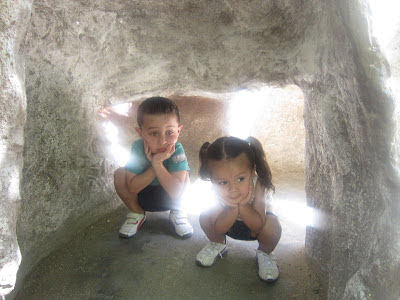 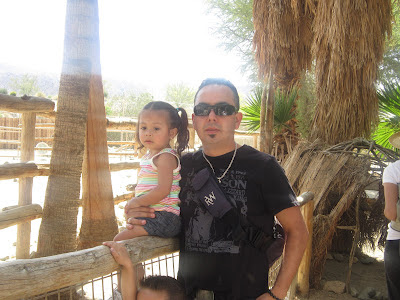 Over Easter weekend, we visited the Living Desert Zoo in Palm Desert.
It was truly amazing. We spent four hot hours there but were just mesmerized with everything we saw. 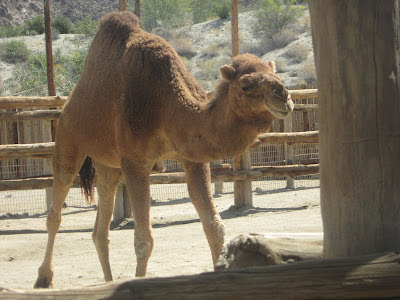 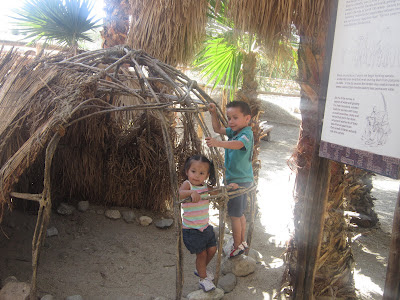 Ancient huts. My savages were climbing on it. 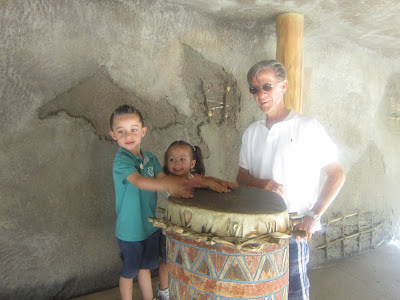 Banging on the drums. 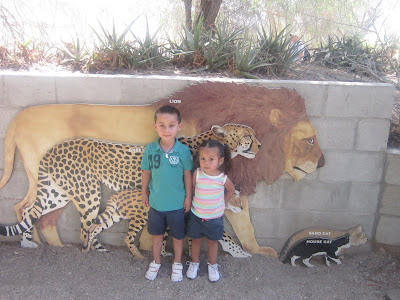 Playing "How tall are you" and Valentina kept trying to PICK UP and PET the PICTURE of the black cat to her right. 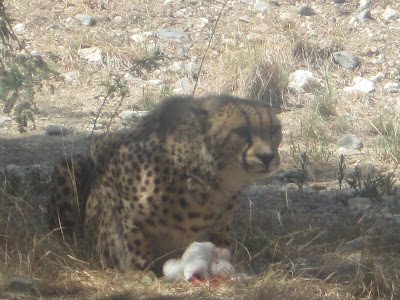 Eating a white fluffy bunny. His stare? At some family standing next to us with two small kids in a wagon, wailing loudly. We bolted. Seriously, he could have EASILY cleared his tiny fence. 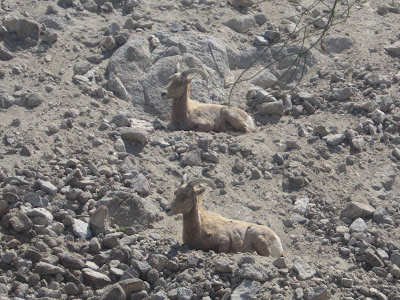 Brother and sister rams hanging out, sunning themselves. We don't really know if they were siblings, but Salvatore was convinced that every pair was a "Sal and Val." 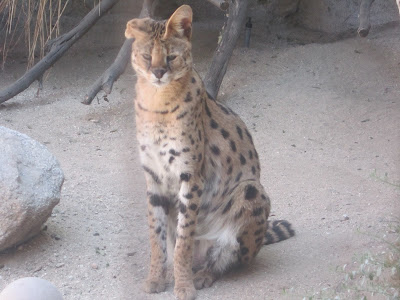 A serval. I, honestly, have never heard of one. I was the only one, apparently, as many others shouted, "Hey, a serval" to their friends. 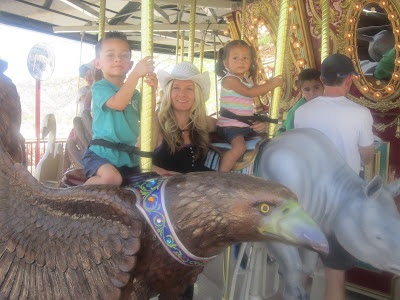 The Merry-Go-Round. Kids were thrilled. I was happy to get them next to each other, as it was crowded and neither was tall enough to "ride" without me. The funniest part was my hips, thighs, and bottom were too wide for the tiny space between their two animals, so I was tossed around the entire time. 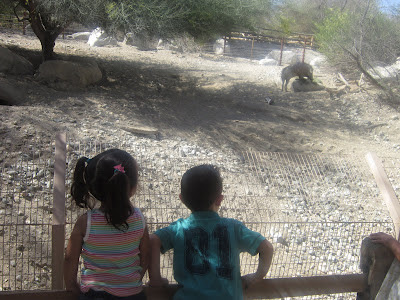 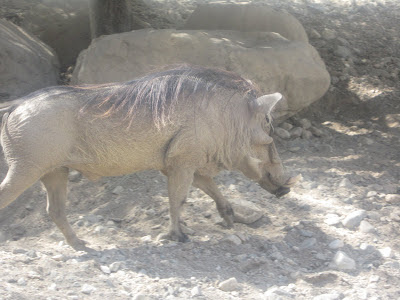 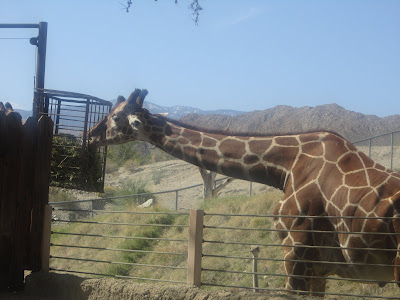 The feeding of the giraffes. The shared a space with some ostriches. Really cool. 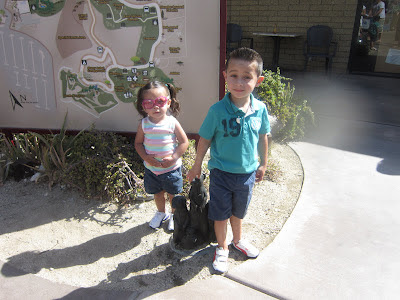 Mr. and Mrs. Super Cool. She kept those Barbie sunglasses on right up until we walked inside. Boo. They were darling.
If you are ever near Palm Desert, you must add this to your list of things to see.
Posted by The Liconas at 9:14 PM 2 comments: 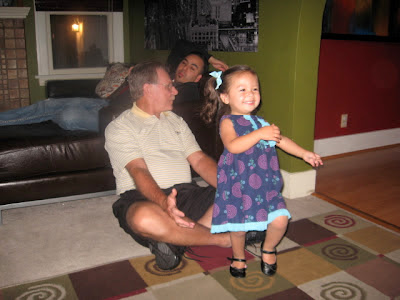 Grandpa Bill came all the way from Florida for work, but we made sure to see him as much as we could for the few days that he was here. Grandpa Bobby helped out by picking him up in LA and bringing him to our house. He hadn't seen Salvatore since he was 6 months old and had never seen Miss Valentina... 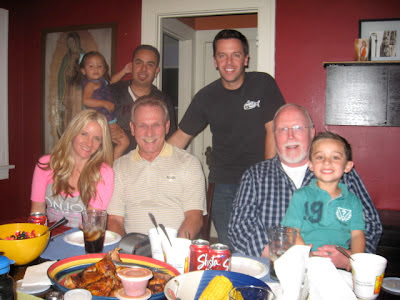 We had a great dinner, lots of laughs and stories, talks of politics, watching the kids show off... 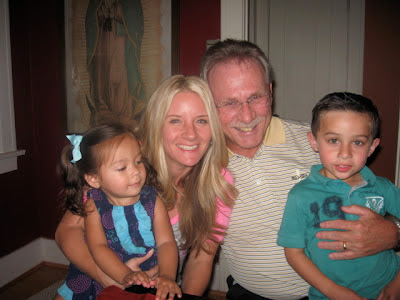 The next night, the kids and I made the drive up to LA to see him again for dinner at his swanky hotel. I was a bit nervous to dine with my two little ones in such a fancy place, but they were great...even at 8 p.m., which was when we finally got our food! We really loved our time together. 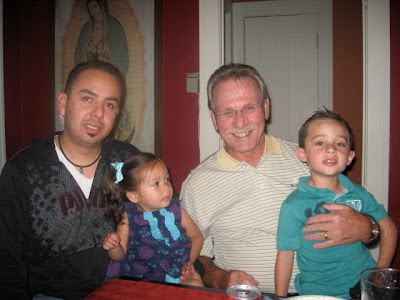 We look forward to more visits from him in the future. My mom, the kids' Sita, comes again this June and we can't wait. We are also waiting for our sister Beth and brother Paul to make their ways back here again for more family time. 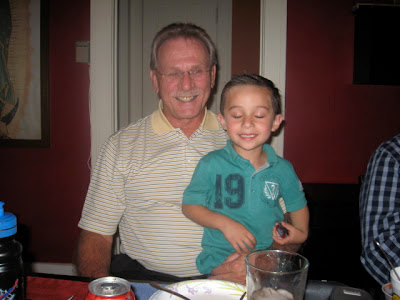 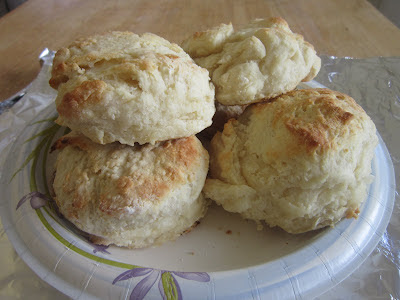 And the picture doesn't lie...these were delicious!
I have been searching, and searching, and searching for a great recipe and most followed the same basic ideas: flour, butter, buttermilk, salt, baking powder, etc. Yet, every time I made them, they were flat, hard and "hockey puck-ish"...sigh...
Until I found this website called Pinch My Salt.
It explained the different amounts of protein in different kinds of flour and it all finally made sense. I broke out my cake flour, followed her exact recipe, and was so surprised that they turned out this good! I almost ate them all right out of the oven. (Be sure to use her recipe listed below the White Lily Recipe, titled My Recipe).
I did not use a rolling pin and I followed her direction to not twist the biscuit cutter.
When I make these again tomorrow morning, I will add a splash more buttermilk.
If you, or your loved ones, love buttermilk biscuits, then you should surely try these! My biscuits will be homemade from now on, thanks to Pinch My Salt! 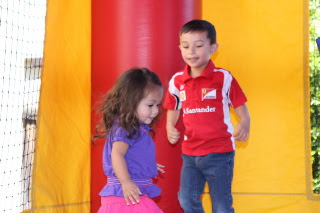 Time is rushing by, but things just get better and better.
Posted by The Liconas at 6:23 AM 1 comment: